At Dhyan Ashram, the volunteers are trying to examine the effect of sound energy on the growth of plants. The present article talks about the preliminary findings and as more independent experiments are initiated, progress will be shared in subsequent issues.

Rationale and Background: Sound is a form of energy, something which was known to the vedic seer thousands of years ago and something which science of the 21st century also accepts. The vedic Indians had mastered the science of sound and codified into specific energy patterns called mantras. Historical accounts are replete with examples of supernatural feats being achieved through these mantras or coded energy patterns, which required great precision in terms of crests and troughs, pronunciation, thought pattern of the chanter and the source of the mantra (from where it was channelized).

At Dhyan Ashram, we experience the power of these mantras daily. There have been occasions where people have been healed, had visions of subtler aspects of Creation, affected changes in their body form and witnessed 360 degree changes in weather and environment with the power of chants of Yogi Ashwini. This study is aimed to quantitatively analyse the effect of such sounds in an experimental set-up to cater to the scientific mind which calls for evidence.

In the last few decades many researches have been undertaken to examine the impact of sound and music. TC Singh (1950) found that plants increased significantly in their rate of growth when stimulated by specific sound frequencies. Eugene Canby (1950) began subjecting test plots of wheat to recordings of violin sonatas, and found that yields increased by 66%. Dorothy Retallack (1968) investigated the effects of music on the growth of plants by using different music styles such as classical, jazz, pop, rock, acid rock, East Indian and country music. We, Dr. Ritu Dangwal and Ms. Poonam Kapoor (2015) attempt to study the effects of chants of a yogi on the growth of plants.

Present Study: Independent experiments are being undertaken to examine the effect of sound on the growth of germination and plant. For this purpose two experimental groups and one control group has been undertaken.

It was difficult to isolate extraneous environmental or human sounds and to give a controlled laboratory environment. However, effort was made to provide as minimal extraneous sounds as possible to the three groups. In other words, the three groups were subjected to similar environmental conditions and the only significant difference was the sound or no sound that they were exposed to.

Tools for the Present Study

Process: 15 to 35 seeds of Jow were taken in three glass Jars that were labeled as Jar 1, Jar 2 & Jar 3. These were filled with equal amount of soil. In order to ensure that the seeds were healthy, a preliminary screening was done.  All seeds were placed in a bowl of water, healthy seeds went down while unhealthy seeds floated in water. Only healthy seeds were taken for the present study. The findings shared are based on two independent studies, one in Delhi and the other in Hyderabad. Various time slots were undertaken by the experimenters for example, Jar 1 was exposed to Yogi Ashwini’s chant from 10 am to 11am; while Jar 2 was exposed to Rock music from 12 noon to 1pm. Rigor was maintained to provide equal exposure of the

two different sounds. Photographs were taken as and when possible with observations noted. The average height for each jar was calculated.  Care was maintained to ensure that all other variables were similar except the sound that the seed/plant was subjected to. 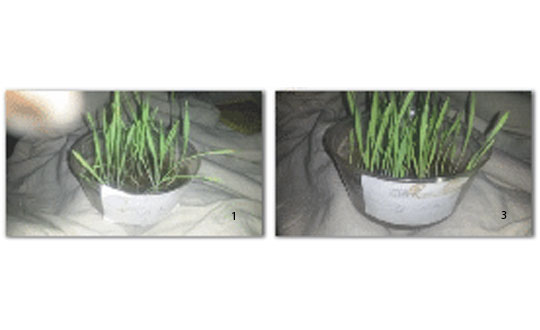 It is clear from the two independent experiments that Jar 1 i.e. the seed & stems of Jar 1 that were exposed to Yogi Ashwini’s chant:

– Grew faster (seeds germinated faster than the other 2 Jars).

– The stems had a finer texture (were long and slender), and

– The stems of the plant grew much more than the other two Jars.

Limitations of the Study: As stated earlier there is research that demonstrates that sound frequency in the form of music has potent physiological and psychological effects, confirming the general beliefs of ancient physicians and philosophers that music can be both beneficial and dangerous. However, researchers in this field have to pay more attention to the nature of the music selected and the quality of sound reproduction before making any definitive conclusion .

The findings in the present study are generic in nature but they are indicative of the positive effects of Yogi Ashwini’s chants on the germination and growth of the plant. As stated earlier , more rigorous procedures needs to be adopted as well as more independent studies need to be conducted to come to a conclusive evidence .

However, these findings are encouraging and definitely indicate that type of sound has an impact on the germination and the growth of a plant.

Acknowledgment: We would like to thank members from the foundation without  whose support the study would not have been possible.

View all posts by Ritu Dangwal →