You would have heard of people dying of sudden heart attacks or cancer in early years. This is an equal and opposite reaction of overstraining the body.

Sanatan Kriya brings the various layers of body in a state of balance, optimising the metabolic rate and enhancing longevity. Regular practice elevates consciousness and it is through heightened state of consciousness that changes are affected in the body and environment.

In this series, we will take you through a set of Body Sculpting asanas, which are a part of Self-Healing with Sanatan Kriya.

It is important to understand here that asanas are just one of the 8 limbs of Ashtang Yog. To reap benefits of Yoga, it must be practiced in totality under guidance of a Guru.  Asanas must not be confused with exercise. For while exercise increases metabolic rate, asanas make it optimum. Sage Patanjali described an asana as “SthirSukhamAsanam,” it means that posture that you can hold for any long period of time, peacefully, with it giving you pleasure, is an asana. Only when an asana is perfected do you feel bliss and stillness in that posture which is indicative of you having thoroughly gone over the yoni, which that asana is indicative of.

Note:  While performing asanas ensure that you are wearing comfortable clothes made from natural materials; avoid deodorants, perfumes, aftershave…basically anything artificial. Keep your eyes closed and maintain internal awareness of the body part that is being worked upon. Maintain ujjai breathing and synchronise the movement with your breath.

Namaskar in Vajrasana: Sit in Vajrasana. That is, with your knees placed together and legs folded such that your buttocks rest on your heels. The big toes overlap, right over the left. Place your palms together in a namaskar and raise the arms above your head, keeping elbows straight. Hold this posture for as long as you can (can start with one minute, and gradually increase the duration), maintaining ujjai and internal awareness.

Sarpasana: Interlock your fingers and place the hands on the hips. Take a deep breath, stretch your arms backwards and raise your upper body, keeping the head parallel to the ground. Exhaling, gently release and come down. Repeat this seven times dynamically. People with heart conditions and high blood pressure must not strain while performing this asana.

Bhujangasana: Place your elbows close to the waist, the palms facing downwards next to the shoulders. Inhale. Gently raise your forehead, followed by the neck, the shoulders, and the upper and middle back such that the navel rests on the ground. Gently tilt the head backward such that the chin is pointing forward. The elbows are raised slightly off the ground and held close to the waist. Exhaling, return in the reverse order, head coming down the last. Repeat this seven times dynamically. People suffering from peptic ulcer, hernia, intestinal tuberculosis or hyperthyroidism must not practice this without expert guidance.

Taadasana: Stand straight with spine erect, look up, inhale and stretch your arms above the head while balancing on your toes and then exhale bringing the heels and arms down. Repeat this asana 7 times dynamically.

Shoulder Push in Utthanasana: Stand with legs apart, toes pointed outward. Keeping the back and neck straight and buttocks squeezed in, bend the knees to go down by about ten inches. This is utthanasana. Bring your hands in front of your chest, palms open facing outwards in a pushing stance. Inhale in ujjai, expanding your stomach as much as you can, and then as you exhale push swiftly in one go, using not hands but the strength of the shoulder. It is imperative to keep your spine erect. Repeat seven times. This asana must not be practiced in case of uterus prolapse and after three months of pregnancy.

Hast Utthan and Pad Hasta asana: Stand straight, raise both your hands above the head, inhale and bend forward and touch your toes. Exhale, come up and bend backward as much as you can without causing any stress to the back. Bring your hands down to your side. This is one round. Repeat this seven times dynamically.

Torso Circles in Utthanasana: Maintain the utthanaasana. Raise your arms above the head, palms rolled into a fist. Moving clockwise carve a circle with your upper body – bend forward with a flat back, pivot to the right, from here to back and through left come back to centre. This makes one circle. Do this seven times clockwise, inhaling half circle, exhaling half circle. Repeat seven times anti-clockwise. Remember to keep the spine erect at all times.

These asanas are to be done dynamically, and the count can slowly be increased in multiples of seven uptill 49 repeats of each asanas, as the body grows in strength and stability. The effect of all these asanas becomes manifold when practiced with your Guru who channelizes energy into each asana. 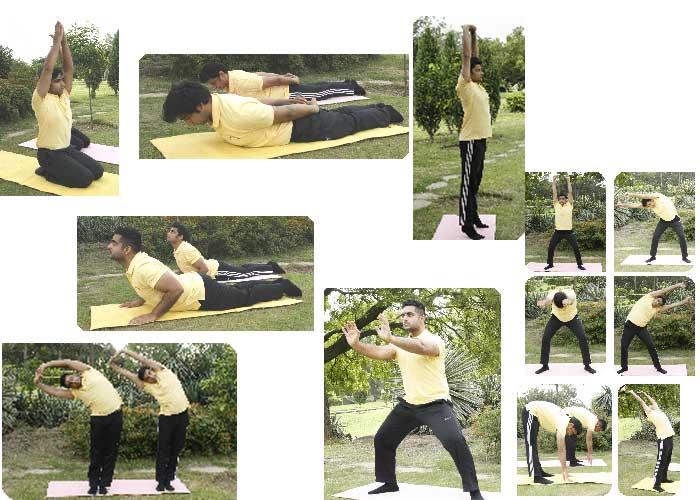 View all posts by Arti Tondon →